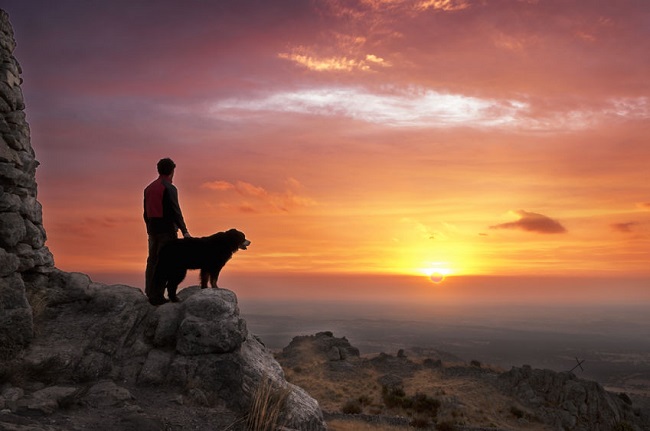 Your dog comes when you call him. He plays fetch. He always seems to know when it’s time for dinner. Did you ever think about how dogs and humans came to be such great friends?

No one can really say for sure what went on tens of thousands of years ago. But there are a number of different theories that try to explain how and why dogs became the companion animal of choice for humans. These theories also look at how humans and dogs have evolved together over the years.

When Did Humans and Dogs Get Together?

When did humans and dogs first start to get along or live together? No one knows for sure. Some evidence suggests that people and dogs first got together around the same time that people switched from being hunter-gatherers to being farmers.

There’s also evidence that dogs and people began working together a lot earlier. In 2011, a paper published in PLOS One analyzed the remains of a “dog-like canid.” The remains were found in a cave in Siberia and believed to date back some 33,000.

The scientists behind the paper theorized that humans began domesticating dogs way back when. But, that process was interrupted by the spread of ice sheets and other climate changes associated with the last glacial maximum.

Before the 33,000-year-old skeleton was found, it was rare to find very old dog remains. Most skeletons or remains found date back about 14,000 years ago. There are a few that date back 26,500 years, but those are few and far between.

Where Did Humans and Dogs Get Together?

Another part of the human-dog relationship that researchers aren’t certain about is where people first began to domesticate dogs. Remains of early canines have been found around the world.

Researchers have found the remains of puppies or dogs buried with humans in parts of Israel. As reported in Nature, the remains are thought to date back 12,000 years. The fact that the dog was buried with the person suggested a close bond between the two.

The 10,000-year-old remains of a dog found in Texas suggest a slightly less appetizing early relationship between humans and canines. The remains were found in human waste. Researchers drew the conclusion that not only were people living with dogs in the Southern part of the what’s now the US, they were most likely eating the dogs too.

How humans and dogs got together is a bit of a chicken or the egg problem. Did humans first approach wolves, ancestors of modern dogs? Did wolves come to humans? A recent study suggests that the wolves came to humans first.

It doesn’t make much sense for humans to want to buddy up with wolves. While dogs can be cute and cuddly, wolves are not. They are voracious, ravenous creatures. They eat a lot and they don’t exactly  have a reputation for sharing.

Humans don’t have the best track record when it comes to wolves, either. Way back in the sixth century, in Athens, Solon put a prize on the head of wolves. Anyone who successfully killed one got a financial reward.

In Scotland, burning down the forests seemed like a better idea than learning to live in peace with the wolves.

Then, there’s the US. Before European settlers arrived, there were up to 500,000 wolves across the country. By 1960, there were only about 300 left in the lower 48 states. Conservation efforts have led to an increase in the wolf population in recent years, but it’s nowhere near earlier levels.

Given that people have gone out of their way to get rid of wolves, it seems more likely that it was a wolf that first tried to make friends with humans. One hypothesis states that a wolf approached humans one evening, made it clear that it meant no harm and managed to get a bite to eat from its new found friends. The early wolf saw an opportunity and took it.

From Wolves to Dogs

Dogs and wolves might share some features in common, but there’s a vast difference between your canine companion and the wolves that roam free. Dogs don’t just look different from wolves. They behave differently as well.

Dogs tend to look cuter than wolves. Take a look at your pup. He or she probably has big eyes, a small face and small or floppy ears. The modern dog is stuck in a state of extended youth. Even as they get older, they retain traits that wolves outgrow.

As dogs evolved from ancient wolves to domesticated animals, they learned to communicate with humans. Your dog probably knows his name. He might be able to recognize certain words.

A study found that dogs are about as in tune with people’s communication signals and cues as are human infants. In the study, 16 dogs watched videos of a woman. She was indicating two different containers. In the first video, she looked at the dogs and spoke to them in a high pitched tone. In the second, she didn’t look at the dogs and spoke in a lower tone.

The dogs spent the same amount of time looking at the woman when watching either video. But they also watched the container she was pointing to when she spoke to them in the higher pitched voice. A higher voice indicates to dogs that a person is speaking to them and trying to convey some sort of information. In this case, the dogs perhaps thought the woman was telling them something about the container.

In the early days of human-dog interaction, being able to communicate had particular benefits. Dogs who could follow directions or read their human’s facial expressions could be useful when people were out hunting. People were more likely to choose to live with dogs they could communicate with than with animals like the wild wolf.

Another hypothesis concerning the domestication of dogs and coevolution of dogs and humans was the use of tools by people. Learning to use tools, such as spears and knives, gave people a pretty distinct advantage over other animals.

Humans weren’t only able to hunt and kill more quickly with their tools. They were also able to prepare and process their prey more quickly. Since it took less time for a person to kill, skin and eat an animal with tools than before, people began to eat more meat.

The more meat people ate, the smaller their social circles needed to become, so that there would be enough food to go around. For that reason, humans began to spread across the earth and to move into previously unsettled lands.

Early dog ancestors most likely joined up with humans for two reasons. They were opportunists and saw a chance to be fed and cared for, as described above. Humans also might have found that the wolves provided them with an opportunity.

The argument goes that it’s very possible early people looked at their canine companions as extensions of their tools. Hunting became somewhat easier and more successful with a dog.

Along with helping during a hunt, these early dogs could have served as a sort of protection system. The dogs could bark to alert the humans when a stranger or large predator approached a home or settlement, for example.

As dogs and people continued to live together, they continued to evolve together. One of the major changes experienced by both humans and dogs was the addition of starches to their diets.

Ask anyone on the Paleo diet, and they will tell you that people didn’t always eat grains and starches, like potatoes. But as humans switched from hunter-gatherers to farmers, they began to cultivate and eat grains. So did their four-legged companions.

According to a study conducted in Sweden in 2013, modern dogs have genes for digesting starches and grains that modern wolves lack. The first of these genes breaks down complex carbohydrates. The second gene splits the simple carbs into sugars. The third gene allows the intestines to absorb the sugar.

Would dogs have been able to co-exist and live with humans had they not developed those genes? The Swedish researchers think not.

While humans and dogs have both increased production of the amylase gene, their coevolution diverges somewhat. Human saliva contains amylase and starts the digestion process in the mouth. That’s why humans chew.

Dogs don’t chew and tend to scarf down their food. They don’t have amylase in their saliva. Instead, they to swallow their food before digestion can start.

Dogs and people both process word meanings using the left side of their brains. Meanwhile, the right side of the brain is active when people and dogs are detecting emotion or tone.

The findings suggest that people aren’t alone in being able to decipher meaning from words. But it’s unclear whether a dog’s ability to get understand the meaning of words is related to their domestication by humans. Even if it stretches back 30,000 years, the connection between humans and dogs hasn’t been around long enough for dogs to evolve the ability to process meaning from speech.

Researchers suspect that other mammals also have the ability to detect word meanings. But dogs tend to be the easiest subjects to test. Cats and other mammals are less likely to sit still long enough for any imaging to take place.

The similarities among their genes might explain why humans and dogs share a number of diseases in common. Like people, dogs can become depressed and anxious. They can suffer from obsessive compulsive disorder too. In some cases, the medications used to treat certain conditions in dogs are the same as the medications given to people. Dogs can get a prescription for Xanax, although the dose is usually much lower.

It’s not common for the same genes to develop and evolve in two completely unrelated species. But the close companionship dogs and humans have enjoyed for tens of thousands of years makes it not unlikely.

If you’ve ever looked at your dog and thought “he gets me,” you are probably right. Over thousands of years, humans and dogs have grown not only to tolerate each other, but to share many similarities when it comes to genes and temperament.