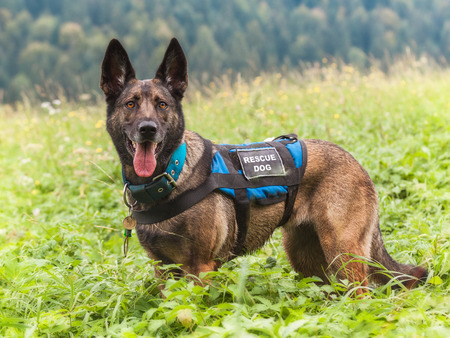 Dogs can be much more than man’s best friend. Some dogs can help save people’s lives. Search and rescue dogs are trained to detect human scent in disaster conditions, such as in the rubble created by an earthquake or bombing. The dogs can also detect the smell of  humans who might be buried by an avalanche or mudslide.

In recent years, several search and rescue dogs have earned recognition following several major earthquakes. These dogs saved the lives of a number of people by helping rescue workers find people buried by rubble or debris.

Although some dogs are naturally better sniffers than others, most dogs need some sort of training before they become search and rescue or earthquake rescue dogs.

The guidelines used by search and rescue organizations to certify dogs vary from group to group. In many cases, the guidelines are likely to be based on those created by The National Association for Search and Rescue (NASAR). NASAR was founded in 1972 to support the State Search and Rescue Coordinators. Today, it provides material and guidance to help organizations build their own rescue dog certification programs.

In the US, dogs and handlers who want to participate in the Federal Emergency Management Agency’s (FEMA) Urban Search and Rescue task force need to earn certification. To earn FEMA certification, a dog and his handler need to conduct a simulated search for victims on piles of rubble. Dogs who pass the test need to be obedient, able to follow voice and hand signals, agile and able to bark to let their handlers know if they’ve found something.

What Dogs Learn in Training

During their training, rescue dogs typically learn one of two styles of scent detection. Trailing dogs work on a leash. They learn to follow the scent of a human after being exposed to something that has a person’s specific scent, such as a worn sock.

Earthquake rescue dogs can also be trained as area search or air scent dogs. Area search dogs roam over a specified area, searching for any human scent. They work off leash and are trained to bark to alert their handler if they find anything.

Usually, once a dog has one of the two styles of scent detection down, he or she can train in more specific methods. Earthquake rescue dogs usually learn disaster rescue techniques. These techniques teach the dogs to find people who might be buried under collapsed buildings or debris after an earthquake. 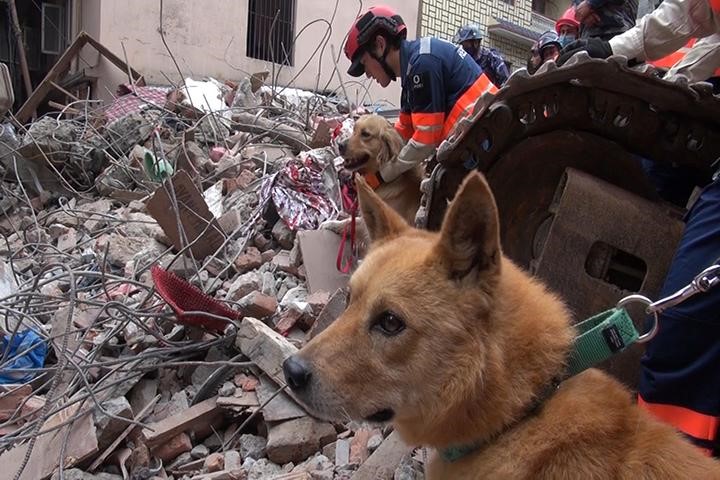 Yumenosuke is a rescue dog with a rags-to-riches story. He was abandoned and left at an animal shelter as a puppy. The shelter was so overcrowded that on the day he was scheduled to be euthanized, there were too many dogs and the shelter workers didn’t get to him. That same day, an organization called Peace Winds Japan visited the shelter, saw the dog and decided to adopt and train him to be rescue pup.

Yumenosuke had some trouble with his training at first. He was timid, scared of people and terrified of dark, confined spaces. Over the course of three years, he got over his fears. His first rescue mission was in Hiroshima, where he saved people trapped by mudslides in 2014. His story was written into a children’s book, NHK reported.

In 2015, Yumenosuke and his handler traveled to Nepal to help find victims of the 7.8 earthquake. They worked at for five days, searching for people trapped by collapsed buildings. 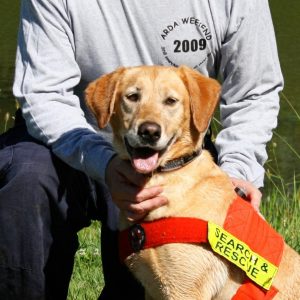 An All American Dog: Meet Pryse

Pryse, a labrador retriever, lives in Lynchburg, Virginia. His handler is Ron, a retired firefighter. Ron and Pryse work with the Virginia Search and Rescue Dog Association and are certified by FEMA. Like Yumenosuke, Pryse also went to Nepal to search for survivors after the earthquake in 2015.

The Washington Post reported that Pryse and Ron were in Katmandu when a teenaged boy was rescued from the ruins of a hotel. The boy had been trapped under the debris for five days. After the boy was pulled out, Pryse ran up to sniff through the rubble, but found no more signs of human scent.

Pryse isn’t the first rescue dog Ron has worked with. He’s trained two other dogs, Ondo, who has since died, and Tomo. Tomo is now retired, but traveled to Japan in 2011 to help look for survivors of the earthquake and tsunami. 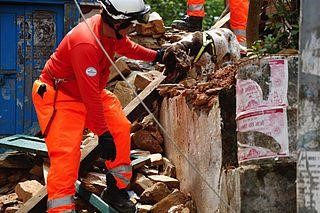 Diesel is a rescue dog from Scotland. He and his handler, Gary Carroll, are members of the United Kingdom’s International Search and Rescue Team (UKISAR). Gary is also a firefighter and part of the Scottish Fire and Rescue Service.

The pair traveled to Nepal in 2015 to be part of the rescue efforts after the earthquake. It was Gary’s third time helping after an earthquake, but Diesel’s first rescue mission. The pair were joined in Nepal by three other rescue dogs and their handlers, rescue crews and doctors with the UKISAR, according to the Scottish Fire and Rescue Service.

The Press and Journal reported that Gary was a bit nervous about bringing Diesel, a springer spaniel, over to Nepal. The weather in Scotland isn’t similar at all to the weather in Nepal. Gary was concerned that Diesel would have some difficulty with the heat. Diesel ended up being fine, thanks in part to a haircut he’d gotten a few weeks before the big trip.

While in Nepal, Diesel and Gary searched in two buildings. Diesel did very well searching and covered a considerable amount of the area, according to Gary. 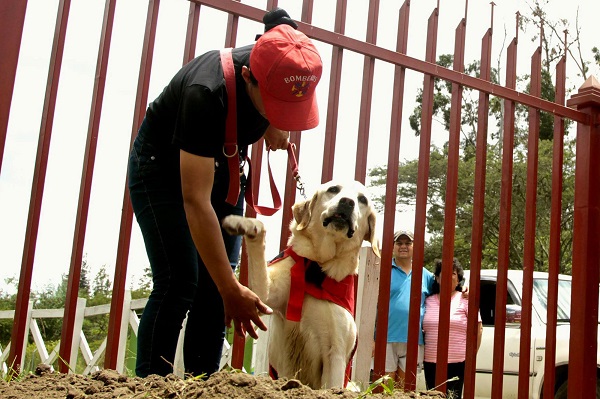 Giving His Life to Save Others: Meet Dayko

Dayko was a true hero. He was a 4-year-old labrador who worked with the fire department’s K9 unit  in Ibarra, Ecuador. After a 7.8 earthquake struck the country’s coast in April 2016, Dayko was there to help rescue people from the rubble. According to the Washington Post, Dayko saved seven people after the earthquake.

Dayko’s story  has a sad end. The stress caused by excessive heat and hard work was too much for the dog. Despite the efforts of veterinarians, Dayko died from respiratory failure and a heart attack, connected to exhaustion.

After his death, the fire department released a statement in remembrance of the dog. It read, “Dayko joined our canine program when he was just a year old. Since his arrival, he captivated us with his compassionate gaze and his friendly character.” 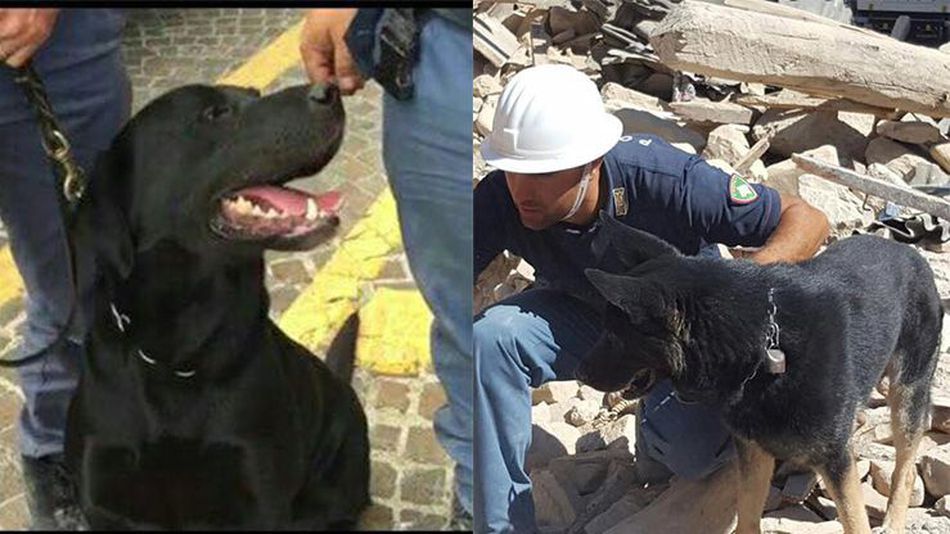 In Pescara del Tronto, a village hit particularly hard by the earthquake, Leo worked to find Georgia, an 8-year-old young girl. Georgia was trapped in the rubble of her family’s home for 16 hours.

Leo signaled the presence of the girl to his handlers after just 40 seconds on the site. The handlers and a rescue crew dug by hand for nine hours. They eventually found the girl.

Thanks to his hard work, Leo has met a number of world leaders. The pope pet him and gave his paw a shake, after praising the human rescue workers for their deeds. Leo also met Angela Merkel, the chancellor of Germany, and Matteo Renzi, the prime minister of Italy.

In Amatrice, Sarotti helped rescuers find a 10-year-old girl who was stuck beneath a collapsed building. Sarotti found the girl’s scent and indicated a spot to the human rescue team. The team dug until they eventually saw her pajamas in the area. After continuing to dig, the girl was freed from the ruins.

As the English-language Italian newspaper the Local noted, dogs did more than help with rescue efforts after the earthquake. Mafia, a 4-month-old pitbull, barked for 40 minutes before the quake struck Amatrice, waking his owners up. They were able to leave their home after the first quake and escaped harm. The family’s home was unscathed by the main quake, but considerably damaged by the aftershocks.

Another dog, Romeo, a golden retriever, was the subject of a rescue mission. Nine days after the earthquake, rescue crews freed the dog from a pile of rubble. Workers heard the dog barking and were able to dig him out. Although a bit wobbly at first, Romeo was uninjured. He was quickly reunited with his owners after his rescue.

Dogs can be so much more than just companions. With the right training, it’s possible to teach dogs to be lifesavers in the event of a disaster.