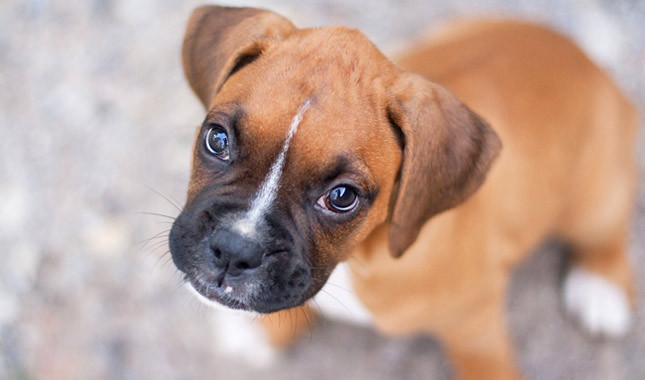 A Boxer can quickly become part of any family. As a protective yet fun-loving breed, a Boxer knows when to have fun and when to be alert. Boxers have frequently been used in police situations and are part of the working group of dogs, meaning they are high-energy and extremely intelligent.

Boxers love their family and their owners, so they won’t allow any stranger to compromise their well-being. While Boxers can be skeptical of strangers, they are incredibly friendly and social once they perceive there is no threat.

The Boxer breed we know today was created by breeding a Danziger bullenbaiser and a Brabenter bullbaiser. Both breeds have since become extinct, but were frequently used in hunting. The Boxer grew in popularity in 1800s Germany, primarily used in military and police situations.

The Boxer is an incredibly strong breed the exudes seriousness and protection. The breed has a relatively short nose but a large, almost square shaped face. The ears of a Boxer can be either cropped or uncropped. As a cousin to the bulldog lineage, the Boxer has the wrinkled face commonly characterized by the breed.

Boxers love to have fun and be around their owners and other animals, but they can also be extremely serious and protective. The Boxer breed makes an excellent work dog, having been used in military and police situations in the past because of their love for exercise and being challenged.

A Boxer will be incredibly protective of its owners and family. The dog’s fierce loyalty to his or her owners allows them to have a lot of patience when dealing with young children and they are usually very playful, making them great family dogs.

Generally, Boxers are very healthy animals that do not run into health problems when properly taken care of. Although the majority of Boxers will not face health conditions during their lifetime, they are not completely prone to developing common canine diseases.

Health conditions that Boxers may experience include brain tumors, lymphoma, degenerative myelopathy, cardiomyopathy, and hypothyroidism. Owners should know the various symptoms associated with these conditions and seek treatment as soon as possible to ensure a speedy and full recovery.

Boxers will also need to be frequently checked for things like ticks and fleas and receive all their necessary vaccinations. Regular trips to the vet can ensure Boxers remain in good health and get the care they need.

Boxers require lots of exercise and need to be a part of a family that is able to provide them with the mental and physical stimulation they need. As dogs that have previously worked to guard and protect, Boxers love a challenge and feel best when they feel as if they have a purpose.

Because Boxers are extremely independent and loyal, they are not difficult to care for, but they will look to their owners to provide exercise opportunities.

Boxers will need fresh water consistently throughout the day. Due to their extremely active lifestyles, Boxer owners will also need to ensure they are providing enough nutrients through their dog’s meals.

The frequency and amount of food each Boxer needs will vary from dog to dog. Influencers usually include how active the animal is and if the Boxer is still growing. It is not uncommon for a Boxer’s dietary needs to change as they grow older and more or less active.

Owners can discuss with their vet the proper feeding frequency and amount of food that their Boxer needs. Getting the right amount of food and water is extremely essential to ensuring a Boxer puppy grows into a healthy and active adult.

Because Boxers have a short, fine coat, they only need occasional grooming. Frequently brushings can keep the coat shiny and healthy, with the occasional bath to remove dirt and dust from their coat. Because Boxers are extremely active animals, they may require more bathing than other more inactive dogs.

In addition to bathing and brushing, Boxers need their nails clipped every once in a while to discourage overgrowth and crackling. Owners should also frequently check and clean their Boxer’s ears as a buildup of wax or dirt can cause infection. Owners will also need to brush their Boxer’s teeth every so often to avoid tooth or gum infections.

Boxers are extremely protective of their owners and families, making them excellent additions to households with children. Although Boxers are highly intelligent, they are also extremely patient and loyal, making them great with kids.

Boxers are very active animals, so they are best in households that are also very active and has the means to provide their pet with the physical stimulation they need. A Boxer can make an excellent addition or families looking for a guardian or watch dog that is still friendly and social. As a high-energy, medium-sized dog, Boxers are not recommended for apartment living and do best in a home with a yard and space to run.