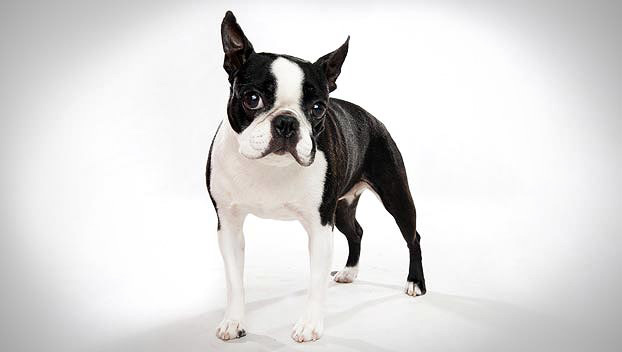 The Boston Terrier, sometimes referred to as the “American Gentleman,” is one of the most popular breeds in America. As a small dog with a big heart, the Boston Terrier makes a great addition to families and homes. Boston Terriers love being around new friends and have a deep care for their owners, making them an excellent addition to a family that is social and active.

Boston Terriers are small yet strong dogs. They have a large head in proportion to the rest of the body with a short snout and pointed ears. They have a short, fine coat that appears in a variety of different color combinations and a short tail.

Boston Terriers are very smart dogs but they also enjoy having fun. They look for activities that are enjoyable and encourage a connection with their owner or other animals. As a non-sport dog, Boston Terriers are not frequently found in performance competitions or obedience shows but when they do appear, they generally do very well.

Boston Terriers are relatively small dogs, usually not weighing more than 25 pounds but can be as small as 10 pounds. Both the male and female dogs are usually between 15 and 17 inches tall when full grown.

Although Boston Terriers are generally healthy dogs, they are still susceptible to various conditions prevalent in canines. Some of those conditions include infectious diseases, parasites, and skin and coat problems. Owners should be aware of the symptoms associated with various canine diseases to ensure treatment is provided as quickly as possible.

Boston Terriers are particularly prone to developing eye conditions or having their eyes damaged by dirt, dust and debris. Owners should be aware of their dog’s eyes and keep them clear and clean with the help of eye drops.

Boston Terrier owners should also ensure their dogs receive proper treatment against ticks and fleas, and that they have any necessary vaccinations.

Boston Terriers love being around people, making them easy to care for if the owners and family have time to dedicate to their pet. They are easy to train and have a moderate level of energy, so while some exercise is needed, Boston Terriers make great dogs for apartment living.

Due to the short nose of a Boston Terrier, owners need to be especially precautious of their dog in warm or humid weather. Their short noses can make it difficult for the dog to breathe in particularly warm weather and should avoid excessive exercise during the summer months.

Boston Terriers also need special attention during the winter months. Because they have short coats, they may need a sweater or extra layer if they are going outside for an extended period of time. While it can be tempting to take dogs out to play in the snow, it is not recommended for Boston Terriers.

As with all dogs, Boston Terriers will need fresh water periodically throughout the day. Owners of Boston Terriers should also be sure to provide their pets with food that is high in the nutrients and minerals they need to stay healthy and happy.

What a Boston Terrier eats may change based on the age of the dog and how active the animal is. More active dogs will need to eat more frequently than dogs who choose to stay indoors and might need a different kind of food, such as one with higher amounts of protein.

For Boston Terrier owners worried that their pet is not getting the nutrients they need, consulting a vet can help them determine how frequently they should be feeding their pet and what ingredients to look for when selecting a dog food.

Because the Boston Terrier has a short coat length, the breed only needs occasional and minimal grooming. Aside from the standard grooming necessities that all dogs need, such as frequent brushings and nail trimmings, owners of Boston Terriers should also regularly check their ears for wax, dirt, and debris.

Boston Terriers can also be prone to developing a build-up of dirt, dust, and debris that gets trapped in their eyes. If the dust and dirt are not properly flushed from the eye, is can become painful for the dog and prevent them from seeing. Boston Terrier owners should be conscious of this problem and carry eye drops for the dog if necessary.

Because Boston Terriers are relatively low-maintenance, adopting a Boston Terrier puppy while children are still very young can be a good idea. Their minimal grooming and moderate need for exercise can allow them to be a part of the family without needing to be the star of the show.