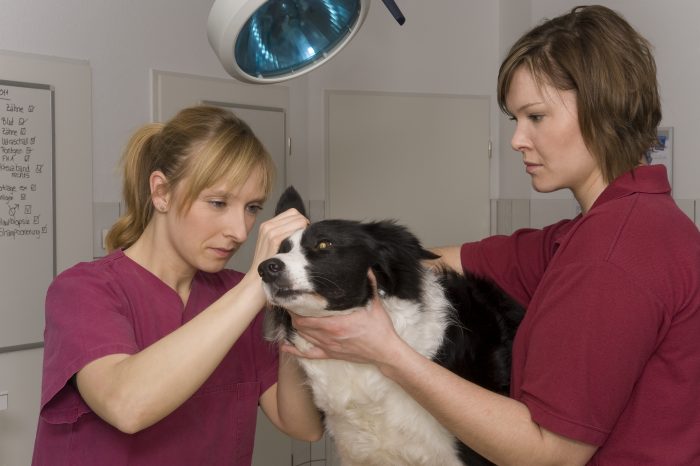 Most commonly referred to as ear mites, Otodectes cynotis mites are parasitic and cause infections within dogs. The case is usually minor, except when a dog has a severe reaction to the mites. The reaction causes extreme irritation to the ear.

The most common symptom of ear mites is scratching around the ears and head. Dogs will also shake their heads excessively to attempt to rid themselves of the parasites. This symptom is a dangerous one, as it can cause dogs to develop a hematoma, allowing blood to pool in the ears and damage to be done to the ear canals.

Another common sign is severe redness and irritation. If the ears look red and inflamed, chances are the dog is in pain from his ears hurting.

A thick appearance of wax may also be visible. It often appears as a reddish-brown color.

It is also typical to see crust forming in the ears, as well as scratches, scabs, and abrasions. This is due to the constant itching, which makes the ears bleed and the wounds scab over. Many times, this process is repeated time and time again until the ears are badly damaged.

Bumps may also be seen in the canal of the ear. These bumps are typically brown in color, and resemble coffee grounds.

Mites left in the ears too long will move elsewhere. This may mean a loss of hair and crusted scabs found on other parts of a dog’s body. The dog will scratch at any area the mites move to, causing damage to themselves.

Due to all of the cuts, blood, and trouble with the ears, a strong odor may develop. This is a good indication that there is a serious infestation that needs to be dealt with immediately.

What Causes Ear Mites in Dogs

Ear mites are most common in cats. These mites find a cat host, and jump to other cats or dogs in the vicinity when they have the chance. They feed on the wax and oil within the ear canal.

Mites may like cats, but they also feed on puppies easily. This is because a puppy does not have as strong of an immune system. Although this is the case, dogs of any ages can be effected.

Foxes and ferrets are typical homes for mites as well.

Ear mites are highly contagious. They make their way from one animal to another, typically starting with cats. They pass between cats and dogs easily through simple contact. Humans, on the other hand, are immune to the mites and will not get them from a pet. 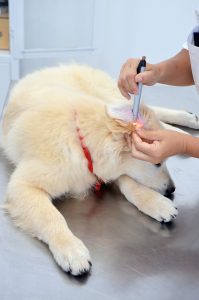 A sample can also be taken of discharge from the ear to determine if mites are in fact the culprit. There are some bacterial infections that can cause similar symptoms, so those typically need to be ruled out first, as they can be more serious.

Mild cases of ear mites can be treated easily. It is when excessive scratching or head shaking has occurred that can cause more serious and long-lasting damage. Death does not usually occur, but a hematoma will require surgery to correct.

How Are Ear Mites Treated?

Before the mites are treated, the ears will need a proper cleaning to ensure any buildup is removed. This needs to be done gently, and could require sedation if the dog does not comply. Many dogs experience intense pain when their ears are plagued with mites, and will need to be sedated in order for their ears to be cleaned effectively. A special ear cleaning solution meant for dogs is available.

Once the ears are cleaned, a solution can be applied to help terminate the mites. There are also medications available that can be placed on areas of the skin where the mites may have spread. These medications are known as miticides. A veterinarian must prescribe them so the proper dose is administered.

Over the counter options are available, but they are typically too low of a dose to do much help.

Pesticide treatments are an additional option, as they quickly work to kill the mites inside a dog’s ear. Many contain thiabendazole or pyrethrins.

Full treatments are required in order to fully eradicate the mites from the dog. Other animals in the home may also need a treatment so they are safe from the parasite infestation as well. All bedding and personal grooming items should also be cleaned.

Some mites may still survive after a few days of treatment. A full treatment is needed so all mites feasting on the dog’s body can be eliminated. This can take up to a few weeks or more, and may require multiple types of treatments.

All bedding must be washed regularly, and ears should be cleaned out on a routine basis as well. This will prevent the buildup of wax, which is what the mites feed on. Clean bedding will not allow infestations to spread as easily.

Mites are not always easy to prevent, but there are some measures that can be taken to help reduce chances of some animals getting them. It is important to keep infected animals away from others. This may mean some time in quarantine for a dog that has the mites. They must undergo treatment and have that treatment completed before they are permitted to be around others.

It is also wise to keep cats and dogs apart. Cats are the main carriers of these mites. Households with both animals should do their best to keep an eye on them and ensure no mites are present. Treating mites as soon as they are noticed will be a major help.

Regular cleaning will also limit the presence of mites. This applies to both a dog’s bedding, and his body. His ears should also be checked at least monthly to make sure no signs of mites are detected.