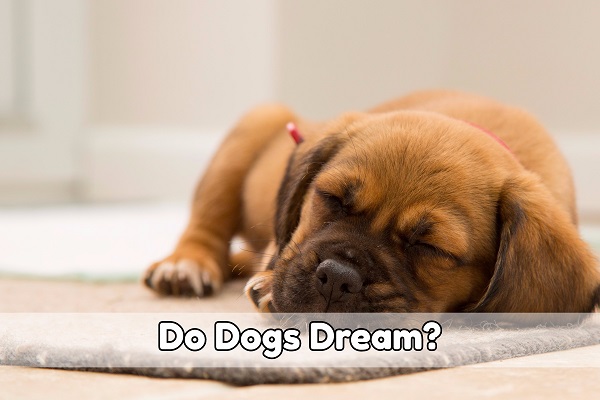 We’ve all seen it happen; our faithful companions make themselves comfortable in their favorite nook, doze off to sleep, and a little while later, they look like they’re comically running in place. Sometimes they’ll let out a few little yelps or start twitching. It piques our interest, and we wonder what could be going through their mind.

So let’s cut to the chase and get to the question we’ve all been asking! Do dogs dream?

Well, the dreaming sequence is a complex process, and as we are all aware, our dogs can’t directly tell us whether or not they’ve been dreaming or what their dreams entail. But the general belief is that yes, it does appear there is enough evidence to support the idea that our best pals are, in fact, dreaming.

A 2001 MIT study aimed to answer this same question about lab rats. They wanted to know if rats had dreams and wondered what they could be dreaming about. During the study, the rats were hooked up to a device which measured neuron activity in the hippocampus since the hippocampus is known to be linked to memory.

While they were awake, the mice performed specific tasks in a maze which resulted in distinct patterns of brain activity. Once the scientists saw that the brain activity was almost identical during sleep, they were able to conclude that the rats were almost certainly dreaming about running through the maze.

What Do Dogs Dream About?

The first question we wanted to know the answer to was “do dogs dream?” Now that we’ve reached the conclusion that they almost certainly do, your curiosity may lead you a step further.

We mentioned earlier in the article that a lot of times, we notice our dogs flinging their legs around wildly in their sleep as if they’re running in place. Aside from pointing out how funny it can look, we often wonder if they’re dreaming about running or what is going on in those wonderful heads of theirs.

The odds are that our dogs are, indeed, dreaming about running around when they’re fast asleep, and it looks as if they’re doing exactly that.

There’s a part of the brain stem which is called the “pons, ” and it is found in both dogs and humans. The pons essentially paralyzes the larger muscles in the body temporarily which usually keeps both people and dogs from actually acting out whatever they’re dreaming of.  The pons in young puppies may be under-developed, however, and it can be less efficient in older dogs. These are likely the instances where we notice our dogs becoming so animated during their slumber.

Can Our Dogs Dream About Us?

In addition to wondering whether or not our best friends dream at all and wondering what those doggy dreams consist of, the next thing most dog-owners want to know is whether or not our dogs can dream about us! People want to know if their dogs have happy dreams where they’re fetching a ball for their owner or cuddling up next to them. It would be a lot easier if our dogs could only give us the answer to this question themselves, wouldn’t it?

There no way to present iron-clad, irrefutable proof that our dogs dream about us, but it is pretty safe to assume that they do! Going back to the rat experiment for a moment, they had dreamt of running through their mazes which is what they had been doing when they were awake. Thus, if we spend a lot of time with our dogs during the day and play with them, it’s very likely that their dreams will include us.

What to do When We See Our Dogs Dreaming

Sometimes we’ll see our dogs twitching about in their sleep. They’ll let out a few growls or yelps, and sometimes they’ll even bark. It might look like they’re uncomfortable or in trouble but the odds are that they’re just making their way through their dreamscape which is likely littered with open fields, treats, and all the toys and love they could ever want. It’s okay to let them sleep.

As humans, we all know what it’s like when we’re in a deep sleep, in the middle of a dream and someone or something wakes us suddenly. We feel startled, disoriented, and need a minute or two to collect ourselves and figure out where we are. Chances are, dogs feel the same way when they’re awakened unexpectedly from their slumber.

Is it Just a Dream or is it a Medical Issue?

In some instances, because of the way they’re moving, you may fear that your canine companion is having a seizure. Some of the movements dogs make as they dream may resemble one but you should still be able to tell the difference. If you are genuinely concerned, a way to know for sure is to call their name. If they’re merely in a dream, they will wake up and respond to you. If, for any reason you suspect your dog has a sleep disorder or medical issue, it’s always better to be safe than sorry and speak to your vet.

Drifting Off and Summing it all Up!

There’s a good chance that anyone who has ever owned a dog has looked for the answer to the question we addressed in this article. We’re always so curious about our companions because they are unable to speak to us and give us the answers we seek. It is safe to assume that not only is your pup dreaming when they’re fast asleep, but they’re probably dreaming about you!

Do you have any funny stories or experiences with your dog’s antics while they’re asleep? Share your story with us and let us know!